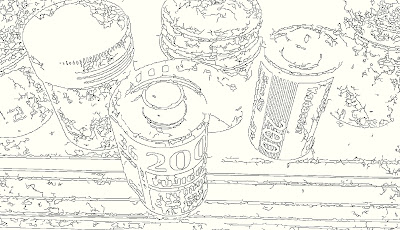 
That analog counterpart to our increasingly digital image worlds.

It's back. (Did it ever really go away?)


Film is the stuff youth was made of. Those were the days, sneaking around in high school darkrooms, trying to get an extra roll or two from the oblivious photography teacher, setting black and white negatives with that goth girl in the class.

Yep, those were the film days for us.

And so then today, in 2016, we thought it would be fun to look at the two absolute cheapest ISO 200 color film stocks that we could easily find in the local stores. Because hey, it's still fun to shoot film! And let's be honest - digital photographers who are accustomed to the freedom to shoot off as many shots as they want until the get the "perfect" shot do indeed care about economics of photography.
So we're setting out to answer: What can budget-priced film offer (mostly) digital photographers who are not experts and also not professionals?

The Kodak brand is an instant eye-grabber when you're on the market for film. As the literal inventors of practically every film format in use, we owe quite a bit to Kodak's efforts over the past hundred years or so. So let me be the first to say, thank you Kodak for all the cool film! Glad you recently got your bankruptcy sorted out.
Now then, that being said, we have to say, we were left with mixed feelings after using Kodak Colorplus 200. It had some strengths, but not everything about it was sunshine and lollypops.

36 rated, in actuality 40 from our camera. Four free shots! Woohoo!

Color Plus 200 is supposed to be a general purpose film, one that produces "pleasing" skin tones, and is ideally suited for daytime shooting considering the ISO rating, although is supposed to work well under various lighting scenarios. It's said to have a fine grain, and "is good for making large prints". It's further supposed to have a wide exposure latitude.

Yeah, for the price it's worth what you get. The color in overcast mid-day shots was somewhat disappointing, and images were not surprisingly almost too contrasty to work with. Mid-day shots on clear days however were, surprisingly, filled with vibrant, pleasing colors. In some shots, the dynamic range looks fantastic, and positively impressed upon us the benefits of film over digital. And then in some others, particularly scenes with the widest range from dark bright, everything just looks like crap. The really shocking thing however was the amount of grain that showed up in literally every shot. We can't say if this is a fault of the film, a fault of the processing, a fault of the scanning or if it's something else, but if this is "fine" grain, zoomed in to a 1:1 ratio, the film grain looks like round blobs compared to a 24 megapixel CMOS digital sensor that lacks an AA filter. We found however that by using Lightroom's ability to filter out color noise, we could make the grain look for more pleasing than the scans we received.

If you want to shoot film and are on a budget, sure, give it a go. You can get some good shots out of it in most conditions, and it's cheap. But you might not want to trust it if you're tasked with getting key, defining shots for an important event or person. The overall color rendering seemed like a range from boring and accurate to occasionally pleasant and unexpected. We also felt that overall, the results were nowhere near as high as what we could easily achieve with a modest digital camera. Once scanned, it did prove easy enough to reduce some of the excessive grain (though at the cost of fidelity), and give anything else that needed fixing at least a mild adjustment. Shots that were just a bit too far off from ideal could not be brought to perfection using typical digital editing techniques.

Is Fujicolor C200 the same as Fujicolor CA135? That was on the canister we had. I was just looking at that. But oh, right, yes, anyway. Fujifilm. Film. The '90s. Japan! 103 years after the advent of 35mm film, we're talking about it. And who could forget that analog titan from the far east in Akasaka Tokyo, Fujifilm. As sensible as a Honda Civic, and as exotic as a Sony Discman. As misunderstood as Bridgestone tires (look it up), and as sexy as a pair of Uniqlo socks.

Just like in the '90s, we still know practically nothing about FujiFilm, other than that they make some great film, they also make some I guess great digital cameras, and that like practically a quarter of the businesses in Japan, the word "Fuji" is in their name. So let's talk shot about Fujicolor C200 film.

36 rated, in actuality 39 from our camera. Three free shots! Great!

Said to be balanced for daylight with fine grain and sharpness. It's further claimed to have a wide exposure latitude and "vivid and accurate" color reproduction. Aside from all of the claims about being suited for daylight and having "balanced", accurate color, it seems like some pretty vanilla film.

We didn't realize that the Color Plus was supposed to be ideal for all lighting scenarios and the C200 suitable for daylight. If we'd known that, we would have made a greater effort to get more shots in the daylight with the Color Plus, and would have at least tried out the C200 a little bit at night. As it turns out, just through sheer chance we ended up shooting our roll of C200 exclusively in the daytime. The colors, surprisingly, did actually look pretty accurate overall.
Nothing seemed particularly impressive, but pretty much every shot was accurate enough, pleasant enough to look at. For what was fairly low-contrast light, it seemed that the C200 had a bit more contrast than we would have normally expected or wanted. Overall, we can't say that the C200 excels at landscapes and nature, but we can say that it does a pretty good job at them. It's got that going for it. Again though, like the Color Plus, all of our shots had a shockingly high amount of grain for ISO 200 film. And just like the Color Plus, we have no idea if this is inherent to the film, the scanning, the processing, or something else.

This film is unquestionably worth using if you're on a budget, can't find anything better, and don't want any surprises (pleasant or unpleasant). There's no way that it will add anything unique to your photos(other than maybe a little bit of saturation in the greens and blues) without extra processing or other techniques, but that can certainly be useful depending on your goals. The honest truth is though that there is absolutly nothing inherent to this film that especially compells us to shoot less with digital cameras, and more with this film. Other than just being film, which today is still something of a novelty, there's just no "wow" factor here to make someone holding a camera want to come back to it.